Kiss And Tell: Third Base Tour 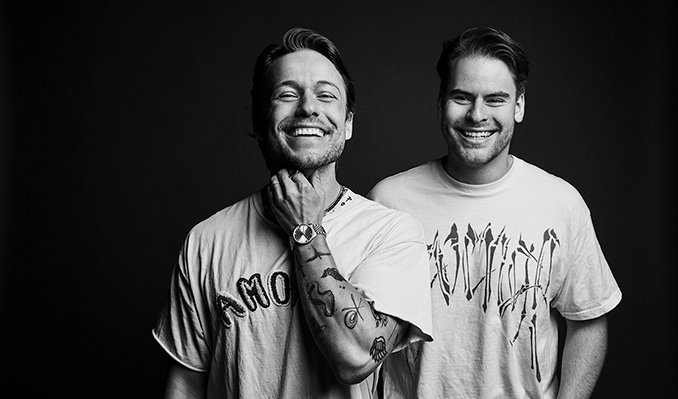 While Dylan Ragland and Ricky Mears meant to start a side project, they weren’t totally expecting to create SIDEPIECE, the GRAMMY-nominated house duo that’s clocked more than 362 million streams since its inception.

The two producers – Ragland makes music as fan favorite Party Favor and Mears produces as dancefloor igniter NITTI – first linked via DM in 2019 to share track ideas. Sensing their musical chemistry, they jumped on Facetime. By the end of the call, they’d registered the @youasidepiece social handles and their own figurative side piece had been born.

“It started out as a fun passion project because we both love and care about house music,” says Ragland, “but it’s grown so much bigger than we originally planned.”

Indeed, success came hard and fast for the pair. SIDEPIECE’s second single, the 2020 Diplo collaboration “On My Mind,” landed on a myriad of global charts, aggregating more than 222 million Spotify streams and earning the trio a 2021 GRAMMY nomination for Best Dance Recording. A flurry of hit singles have followed, with SIDEPIECE carving out a signature sound rooted in catchy vocals – “the most important element,” says Ragland –and the ever-intoxicating bump and grind house groove. Spanning tech house, bass house and beyond, tracks including “Acrobatic,” “Temptation” and “Sextacy” are quintessentially SIDEPIECE: party-starting club records with a pop-lean and serious sex appeal.

Building on this catalog is the duo’s latest, “Reborn,” a steamy dancefloor heater with a pumping bassline and attention-grabbing vocals. The guys anticipate the song, out via Big Beat/Atlantic, will work as well on radio as it has during packed sets at major festivals including Lollapalooza and Coachella.

“All of the clips of us playing shows are just Dylan and me singing ‘Reborn’ at the top of our lungs,” says Mears. “I feel like in six months everyone is going to be singing it. We believe in it that much.”

The creative inspiration driving SIDEPIECE is palpable, with both Mears and Ragland attesting that working with another producer has helped them each level up their artistry and make music faster than they do on their own. (To wit, there are 100 songs in the SIDEPIECE arsenal waiting for release.)

“We’re so blessed to have a partner on this project,” says Mears.“If I’m losing inspiration Dylan jumps in, or vice versa. It’s incredible having someone to bounce ideas off, especially being a solo artist who was used to doing everything on my own.”

“I’ve been producing for so long,” Ragland adds, “but SIDEPIECE feels like a new life in music for me.”

The guys are currently rinsing the hits and road-testing unreleased tracks on their sold-out Kiss And Tell: Second Base tour. Playing sets made up of 80% their own music, they say these shows are where their SIDEPIECE turned main squeeze feels most alive.

“Huge streaming numbers are cool,” says Mears,“but seeing people in the crowd singing along to the song, that makes it all feel real.”

Official WebsiteMore InfoFacebookTwitter
*Service and handling fees are added to the price of each ticket.