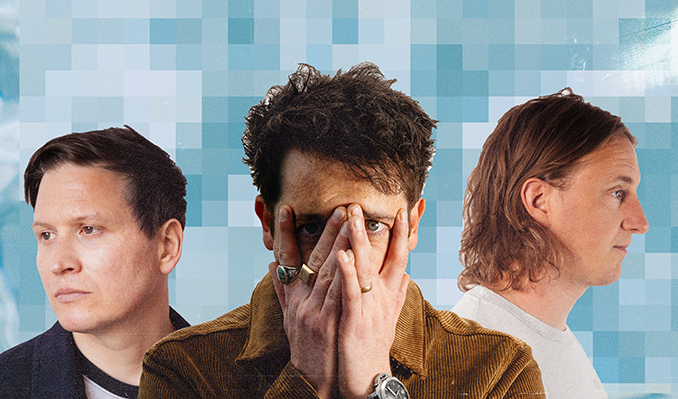 Even after eighteen intense years of bouncing, bellowing and soul-baring your way to the top, some successes strike when you’re not looking. While The Wombats were hard at work remotely constructing their fifth album Fix Yourself, Not The World from LA, London and Oslo, a new generation of TikTokers were sending the band viral by making over 600,000 videos – some viewed over 100 million times – around the opening lines of the Oliver Nelson remix of their 2015 Glitterbug album track ‘Greek Tragedy’: “We’re smashing mics in karaoke bars, you’re running late with half your make-up on”.

“I think one influencer made a video of her dancing, singing the opening, and then it took off and every man and his dog were doing it,” says singer Matthew ‘Murph’ Murphy of a viral breakout that has seen the remix streamed 30 million times, the original track 120 million (sending it gold in the US) and add 2.4 million to their monthly Spotify listeners since January 2021. “Someone sent me Charlie Puth singing it like whilst having some granola. I guess people were searching ‘what is this song?’ It turned out that remix was on some Hed Kandi compilation [Dusk ‘Til Disco, 2015] and that was the only outlet for it. It's cool that random celebrities are singing the opening lines to something I wrote a long time ago, it’s great that it’s doing well but it's just completely random.”

The success of the ‘Greek Tragedy’ remix is further illustration, if any were needed, of The Wombats’ ability to remain relevant to new generations of fans through the timeless power of their songwriting alone. Formed at the Liverpool Institute Of Performing Arts in 2003, they were the three-headed guitar pop sensation – Murph, bassist Tord Øverland Knudsen and drummer Dan Haggis - that erupted out of Merseyside with Top Twenty hits like ‘Let’s Dance To Joy Division’ and ‘Moving To New York’ during the late-‘00s indie rock explosion, stamped their mark on the era with 2007’s fervidly melodic debut album A Guide To Love, Loss & Desperation, and then transcended it. By 2011’s This Modern Glitch (a UK Number 3 hit) and 2015’s Glitterbug (Number 5) they’d easily hurdled the shift to streaming and become a playlist phenomenon thanks to tracks such as ‘Tokyo (Vampires & Wolves)’, ‘Techno Fan’, ‘1996’, ‘Emoticons’ and their online secret weapon ‘Greek Tragedy’.

Murph’s magnificent way with melding deeply infectious melodies with dark, wry and surreal confessions from his fractured psyche and shame-filled romantic history – combined with the band’s gradual embrace of the synthetic tones and textures of modern pop – endeared them to new waves of young streaming fans (over half are under 24) and has seen their popularity continually expand. Their sets at festivals such as Reading & Leeds would draw the biggest crowd flockings of the entire weekend, and the UK tour for 2018’s Top 3, silver-certified fourth album Beautiful People Will Ruin Your Life (home of ‘Turn’, ‘Cheetah Tongue’ and post-row domestic confessional ‘Lemon To A Knife Fight’ and currently nudging 300 million streams) culminated in a celebratory show at Wembley Arena, complete with dancing wombats.

“Top five gig ever,” Murph remembers, “I’m very proud that we’ve stuck in like some dirty little warthogs. It hasn't been the easiest road but we've always kept our focus and it's paying off…I thought it was gonna stay in that mid-2000s indie rock phase forever and then swarms of younger people are now getting into the band and finding the older stuff.” Testament to the strength of your songwriting? “I think for me it's a combination of hard work and that lyrically and musically we've always done what we like. I've never tried to tone it down for any commercial gain. I like weird, odd lyrics, crazy titles or strange concepts for songs. I struggle to write songs that come from more of an accessible or blander place.”

Not a band averse to internal frictions, The Wombats took a well-earned break after the Beautiful People tour wrapped up at Reading & Leeds 2019 and reconvened early in 2020, first as a group at Murph’s home studio in LA where a “bedrock” of four or five songs came together, then working and recording remotely throughout 2020 once lockdown hit, marshalled by a variety of producers including Jacknife Lee, Gabe Simon (Dua Lipa, Lana Del Rey), Paul Meaney (Twenty One Pilots, Nothing But Thieves) and regular Wombats desk-man Mark Crew. “The plan before we started was David Byrne - a decent amount of brass going on - meets LCD Soundsystem,” Murph says of the album’s intended direction. “All I had in the back of my head was to keep it real and as organic as possible and not throw the kitchen sink at it. Then we ended up throwing the kitchen sink at it. Somehow the kitchen sink just appears no matter how much I’d like it to disappear. It's great, but we’ve absolutely lobbed everything at it again.”

With Murph in Highland Park in Los Angeles, Tord in Oslo and Dan in London, discussing each day’s plan via Zoom, then recording separately and sending individual files to the producers to mix into the finished tracks, the recording was “pure madness, to be honest. Dan and Tord can be like fire and ice and the fact that I was away and disconnected made things madder than they needed to be. I wouldn't recommend it.”

The Wombats have the bond and experience to power through such setbacks however; Fix Yourself, Not The World turned out to be a remarkably cohesive, inventive and forward-thinking guitar pop record, and arguably their best yet. Incorporating cutting edge electronica, pop and R&B elements into the melodic energies of classic new wave, alt-rock and indietronica, it’s a record that will appeal equally to fans of Talking Heads, New Order, The Cure and Charli XCX. It also finds Murph turning a psychological corner: where Beautiful People… was full of semi-comic stories from the brink, or the midst, of meltdown, Fix Yourself, Not The World – as its title suggests – reads more like a self-help manual for the domesticated malcontent

“The pandemic and all the social upheaval massively influenced the idea that the most powerful thing I can do as a human being is to shake my fist at myself rather than shake my fist at the outside world,” Murph explains. “There was this Jungian theory about if you change something within yourself or your actions, you immediately change something in society as a whole.”

Throughout the album, there’s a whole lot of fixing going on. The trash disco funk punk of ‘You Flip Me Upside Down’ – set in James Murphy’s Brooklyn wine bar The Four Horsemen, if not one of his catchiest fever dreams – has Murph admitting “I don’t wanna sit around and just get high” as the hedonistic life loses its lustre in the head-clearing rush of fresh love: “It’s aware that the party scene is not gonna be as fulfilling as I may have thought it was in the past,” Murph says. On ‘This Car Drives All By Itself’, a melting pot of space pop, acid house, The Tom Tom Club, ‘Bizarre Love Triangle’ and gang chant punk, he repurposes the concept of the self-driving vehicle as a topical metaphor for coming to terms with humanity’s helplessness. “I thought that that was a great way of saying, we row but the universe steers,” he says. “We're not in control as much we think and I want to learn to be okay with that.”

Where Beautiful People… spotlit the plate-flinging paranoias behind marital bliss, Fix Yourself… focusses more on the transformative release of romantic commitment. ‘Wildfire’ is a heat-hazy tribute to his wife, ‘If You Ever Leave, I’m Coming With You’ an electropop ode to obsessive devotion, ‘Ready For The High’ a sultry buzz rock note-to-self to accept the good times now they’re here. Portishead-esque ballad and first release ‘Method To The Madness’ pinpoints his honeymoon in Barcelona as the breakthrough moment when Murph decided to dump his demons and “fuck my sadness”, and even a song called ‘Everything I Love Is Going To Die’ is an upbeat New Order/Cure homage about trying to live to the fullest while we still can. “Icarus was my best friend,” Murph sings, “so I’m gonna make him proud in the end”.

“I’m maybe learning to start not beating myself up so much,” Murph says. “There’s only a finite amount of time that we have in these ridiculous vessels of ours and we should try to enjoy it. The whole album is kind of about not trying to control anything but just completely letting go.”

Well, not completely. Dotted with snippets of Murph discussing the everyday niggles and irritations that drive him to distraction, ‘Worry’ details the superstitions, paranoias and idiosyncrasies tormenting him daily, from needing everything to be in multiples of three to an irrational fear of mariticide. “It’s supposed to be inside the head of someone who’s losing it a bit,” he explains. And the space rock ‘Work Is Easy, Life Is Hard’ finds just as much fear and confusion in the bark of the online attack dog.

“It’s about cancel culture,” Murph says of pointed lines like “why don’t you chop my tongue out?” and “you don’t speak for me”. “The toxicity of social media. One of my friends said there’s no room for nuance in anyone’s opinions or views on the world, you’re either with us or you’re against us. I think people are sucked into a vortex of pretty bad ideologies when I feel like wouldn’t it be nice if we formed our own ideology individually and talked about them properly, rather than shoving them down people’s necks or cancelling people for not agreeing with us? Where is the conversation, because it’s not gonna progress anywhere without being able to talk to one another intelligently. Maybe the things you’re talking about are far, far, far too complex to be put in 280 characters.”

The Wombats, on the other hand, are becoming pan-generational masters at weaving the complexities of the everyday struggle to stay sane, happy and psychosis-free into forty-five minutes of exuberant future rock, as ever more young streamers are discovering in their millions. As their unstoppable ascent continues, next year they headline London’s O2 Arena. Ready for another high?

Official WebsiteTwitterMySpaceYouTubeFacebook
*Service and handling fees are added to the price of each ticket.