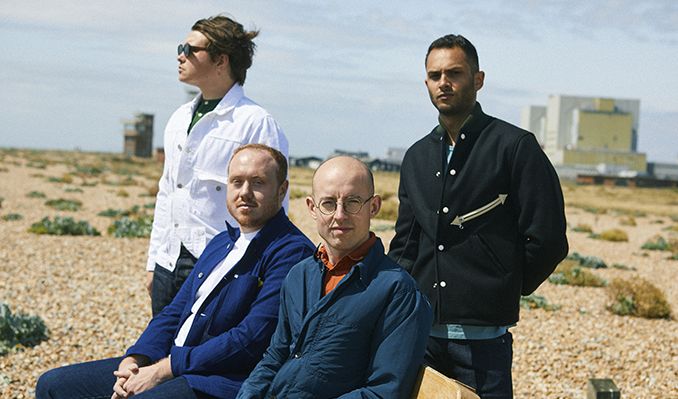 It might seem odd to describe Bombay Bicycle Club as veterans given that nobody in the band is older than 24, but this is their fourth album, which is something of a landmark achievement in today’s blink-and-you’ll-miss-them climate. The Bombay Bicycle Club story is something that isn’t meant to happen any more – a band given the space by their label, Island, to evolve with each release. The album was produced by Jack in the band’s studio in London, making it their most personal record to date. There was always purpose from the beginning to bring everything together for this album, to tell a story from the first track through to the finale with everything interconnecting as a complete body of work.

“I feel like we’ve found the balance between making it interesting and intelligent, but also not highbrow or elitist,” says Jack. “You want to satisfy the people who like the technical side of music, but someone listening on the radio should be able to sing along. If you can find that balance, it’s incredible.”

Bombay Bicycle Club are Jack Steadman, Jamie MacColl, Suren de Saram and Ed Nash. They grew up in north London and signed to Island after leaving secondary school at 18, releasing their guitar-driven debut, I Had the Blues But I Shook Them Loose, in 2009. Their second album, Flaws, in 2010, saw an unexpected change of direction: folky, acoustic and full of sweet harmonies, it was nominated for the Ivor Novello for Best Album. Their third LP in as many years, A Different Kind of Fix, arrived in 2011. It was broader in scope and ambition, with sampled loops and mellifluous keys, sophisticated rhythms and indie-rock guitars.

The new album is similarly innovative, a beautiful collection of songs that will stand the test of time from a band at the top of its game. The songs are built around ethereal loops that owe more to experimental electronica than to the kind of indie-rock the band was initially known for. In fact, the whole album is one giant loop, because it is bookended with the same melody – the final song, the beautifully melancholic So long, See You Tomorrow effectively segues back into the triumphant, string-laden opener, Overdone. Compounding the effect is the last lyric the listener hears: “Keep going round and round and round…”

Jack, who writes all the band’s songs, can trace his absorption in loops to the first music he made as a 13 year old. It was on old pre-Garage Band software called eJay, a simple program that “was my first introduction to arranging and composing and putting loops together and learning how you needed to be dynamic, and things needed to drop in and out in order to make a song.

“It’s interesting because everyone talks about how our albums have been different, but from my point of view, this was there the whole time. I started recording music at 15 on a small setup on my computer – and if I were to release those demo tapes, they are far more experimental and electronic than any of the Bombay stuff.” (This, he attributes to “getting into stuff like Boards of Canada and discovering psychoactive drugs – a lethal combination!”)

The show-stopping first single, Carry Me, is a dance anthem – a bold and radical new sound for Bombay. It brilliantly juxtaposes tough, offbeat rhythms with shimmering keys and techno blips, its vocal refrain looped like a sample. And it is accompanied by an interactive video, in which viewers will be able to animate the band, that has been inspired by the great Eadweard Muybridge, known for his pioneering work with stop-motion photography (itself a loop-based innovation). All this echoes the theme of continuity, which the album is based around: essentially it’s a series of beautiful melodies built around clever loops, all in one giant loop.

Nothing else on the new album sounds like Carry Me – the record flows seamlessly through a range of sonic landscapes that coalesce into a coherent whole. Feel, an uplifting future single, is a surge of optimism built on a Bollywood sample (a snake-charming melody from the 1954 movie Nagin), warm electronic basslines and soaring string-driven melodies. The video will be shot in India and has a Bollywood theme. Another climactic future single, Luna, also has an Indian influence, with some fine tabla playing building into one of the most epic choruses of the whole album. Eyes Off You is a piano-driven festival torch song where emotions fluctuate between dramatic lighters-in-the-air peaks and sensitive, downcast troughs. Home By Now bathes in harmonies as folk meets hip hop; and It’s Alright Now’s tender sentiments are offset by bracing military-funky percussion.

This is a hugely ambitious album that the band has taken its time to perfect (it was written and recorded between May 2012 and October 2013). The music is heavily influenced by the sights and sounds of other cultures, the result of Jack undertaking a series of songwriting tours for inspiration. He travelled, often by himself, to India, Japan, Turkey, the Netherlands and, of course, around the UK. He decided on this approach because “it made me happy. And when you’re feeling good you’re going to start creating things. I need to be feeling energetic to write new music.”

Sometimes he would remain in a country after the band played a show, and immerse himself in the local culture, as he did in India. At other times he selected places randomly on holiday-lettings websites and took himself off to see what happened. This led him to a cottage in the rural Netherlands, and then, later, to a spell living with a family in the middle of the Turkish countryside. “I turned up with all my equipment and stayed for three weeks, and ended up feeling like this weird adopted kid.” At one point he was taken to a travellers’ camp because they were the only people for miles to have a drum kit, which he wanted to borrow, and they turned out to be dazzlingly accomplished musicians who performed a folk concert especially for him, although the drum kit turned out to be “the worst I have ever seen in my life”.

This time around, the band has also had the advantage of having their own studio in London. It enabled Jack to produce the new record himself, a decision he took because he was fed up with being “incapable of describing what I wanted with words, which is something you need to have if you’re going to work with a producer. You just end up sounding like a terrible A&R man.” The new record was made between the new studio and the famous Konk studios in north London. It was engineered and mixed by Mark Rankin (in top form, having recently mixed QOTSA’s Like Clockwork and Aluna George’s Body Music). The album also features familiar vocal contributions from Lucy Rose, and from the impressive newcomer Rae Morris.

“I think there’s a romantic side to it,” says Jack, of the new collection of songs. “Although I always try to leave the meaning side of a song and the theme side open. When I write it’s very much a stream-of-consciousness thing. I think maybe the audience can be the psychologist that analyses it for you…’”

“We want people to interpret the lyrics in their own way,” says Jamie. “I do think it ties into our lack of cynicism, though. More than on any of our other albums, there is a feeling of hopefulness.”

MySpaceOfficial WebsiteFacebookTwitterAmazonYouTube
*Service and handling fees are added to the price of each ticket.