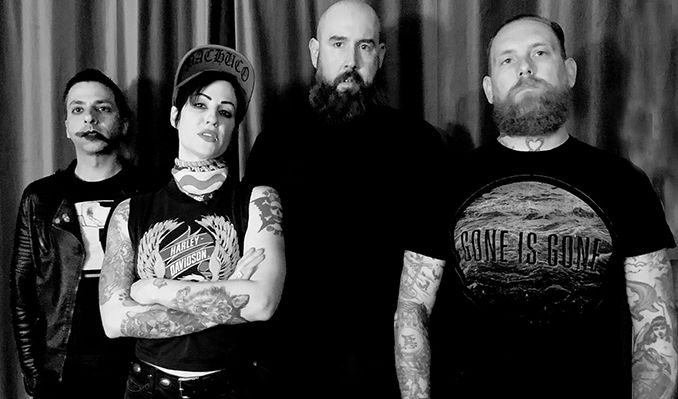 To call The Distillers simply a punk band doesn't do justice to either the band or the word "punk”. Guitarist, lyricist, and vocalist Brody Dalle uses her medium as a platform for a higher plane of visceral lyricism and independence. Few modern day punk icons have not only embodied the genre so truthfully but also transformed the depth of what it can mean so thoroughly. Originally formed in 1998 in Los Angeles, the energetic band, with Dalle at the helm, released a string of damaged and powerful albums, EPs and singles with California punk labels Epitaph and Hellcat, then released their third masterpiece of an album, Coral Fang, on Sire before going on an untimely hiatus and ultimately splitting in 2006.  After breaking a 12-year silence on social media late last year, The Distillers returned, and In September 2018, the punk gods released their first singles in 15 years, “Man vs. Magnet” and “Blood in Gutters.”  The band are currently in the studio working on the follow up to Coral Fang with more to come throughout 2020.

Alexisonfire rose up out of the Southern Ontario underground in late 2001 to become one of the most successful indie bands to come out of Canada. AOF released four hugely successful studio albums, all Music Canada Platinum-certified: Alexisonfire (2002), Watch Out (2004), Crisis (2006), and Old Crows / Young Cardinals (2009). Crisis debuted at #1 on the Top 200 Soundscan (Canada), and Old Crows / Young Cardinals debuted at #2, and charted at #9 on the US Billboard Independent Album chart. Watch Out helped garner a New Group of the Year JUNO (2004). The band has topped charts and graced notable music magazine covers internationally. AOF’s sold-out 10 Year Anniversary tour (2012) touched down on four continents in 24 days, illustrating how meaningful the band still is to their legion of fans worldwide. Alexisonfire also has the distinction of being one of a handful of Canadian artists to perform two consecutive nights at iconic Toronto venue Budweiser Stage alongside City and Colour, Drake, The Tragically Hip, and Sarah McLachlan. In 2019, AOF debuted 2 new tracks “Familiar Drugs” and “Complicit” to the delight of fans worldwide. The impassioned banger marks the first time Alexisonfire has released new music in almost 10 years.