with August Burns Red and Light The Torch 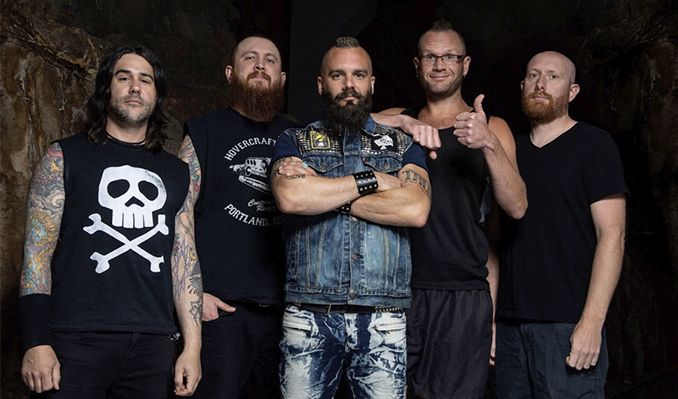 KILLSWITCH ENGAGE exists deep within the eye of the storm, wielding the thunderous power of the elements like metallic alchemists, touching a nerve with the disenfranchised, and crafting populist anthems that both challenge the status quo and rally those who society casts aside. Across multiple albums, videos, and worldwide tours, KILLSWITCH ENGAGE forged a musical foundation steeped in classic heavy metal, melodic death metal, and early punk/hardcore, and built a following across economic, political, religious, international and social divides.

No matter the climate, KILLSWITCH ENGAGE makes trend-resistant, timeless heavy music that has elevated them to the critical and community status of the greatest of American metal bands. The fiercely individual yet collaboratively resilient New Englanders have also commanded respect and appreciation from all corners. Having shared the stage with acts ranging from Rise Against to Slayer, the diversity and versatility of their touring reach is unparalleled. As headliners on celebrated tours like Ozzfest, Vans Warped Tour, Taste of Chaos, Rockstar Mayhem, and countless international festivals, their influence reigns on a worldwide scale.

KILLSWITCH ENGAGE anthems, singles, and live staples, like “Fixation on the Darkness,” “My Last Serenade,” “A Bid Farewell,” “My Curse,” “Always,” and “In Due Time," have had staying power and appeal to all generations of metal fans worldwide.

The band’s seventh studio album, INCARNATE, possesses a stack of new KILLSWITCH ENGAGE anthems certain to set the heavy music world ablaze once more. A defiant cry to let go of the past, to keep away from scars that resurface, “Cut Me Loose” will resonate with anyone who struggles with anxiety or depression. "Hate by Design" also challenges our habit of tearing down when we should be building up, while “It Falls On Me” was penned during singer Jesse Leach’s solitary trips into the wilderness, where deep reflection and meditation resulted in the most intense of spiritual yearning. “The Great Deceit” is the heaviest song on the record, a scathing screed against the corruption that exists within government, organized religion, and other institutions. It’s not so much choosing a side as calling “bullshit” across the board, enlivened by the spirit of The Clash and Bad Brains that’s also a vital part of the Killswitch DNA.

“I find myself not in the light and not in the darkness, but dead in the middle, pleading to both sides, trying to find balance and peace,” says the singer, with characteristic honesty and humility. “I haven’t lost my faith, per se. But I’m not swallowing the contradictions or the dogma of everything we were all taught.”

As cofounders of KILLSWITCH ENGAGE, lead guitarist/backing vocalist Adam Dutkiewicz, rhythm guitarist Joel Stroetzel, bassist Mike D’Antonio, and Leach (who returned four years ago after a decade-long absence) together with longtime drummer Justin Foley employ unrelenting determination to continually release powerfully potent work. Ever the technician, Dutkiewicz’s impressive skills as a producer (a discography that includes work with August Burns Red, Every Time I Die, and Parkway Drive) is part and parcel of the KILLSWITCH sound. Foley’s power and dexterity has been evident since he first emerged in the band Blood Has Been Shed. In addition to his undeniable stage presence and rhythmic heft, D’Antonio works behind the scenes most of the band’s cover artwork, merchandise, and web presence. Stroetzel is the most dyed-in-the-wool metalhead of the bunch.

Leach wears his heart on his sleeve like never before, coming out of the experience of making INCARNATE a brand new person. It’s an album of reclamation and redefinition, from a band that still rules the scene.

Leach sounds more confident and inspired than ever on INCARNATE. But this was no easy feat to achieve. He came back into the band he cofounded after the writing process for Disarm the Descent was largely finished. The band was quickly on the road behind the well-received album. Following the long touring process, Leach was determined to put a definitive stamp on this new album.

“I really wanted to make sure that where I was at in my life was really represented properly on the record. I took a couple weeks to just soul search. I fell into a bit of a depression and because of that I came up with some pretty dark stuff,” he confesses. “By the time the record was done, I realized I'd changed. I was a different person. That has never happened to me before with a record.”

The closest he’d come to this type of transformative experience was with Times Of Grace, the project where he first reconnected with Dutkiewicz after years of estrangement. The record the pair made together under that moniker reignited their electric songwriting and their honest give-and-take in the studio.

“Jesse is a very passionate dude with a lot of things to say,” notes his longtime friend and collaborator. “Vocal tracking is probably my favorite part of the recording process. We’d end up having deep conversations about life, politics, religion. The kind of conversations old friends might have over a cup of coffee.”

Leach pins much of the creative confidence of INCARNATE on the band’s defiance of compromise. “As a creative individual I refuse to phone in anything. I refuse to let stuff slide. I don't care about deadlines or the business side of things,” he says. “If we don't deliver a record that's got our souls on it, then we're doing ourselves a total disservice. And we’d be doing our fans a disservice, too.”

All of it has kept them enveloped in the most excitingly relevant pop culture touchstones of any given era since, ever since they formed back in 1999.

Alive or Just Breathing (2002) was certified silver in the United Kingdom as were The End of Heartache (2004) and As Daylight Dies (2006), both of which were certified gold in the United States for sales in excess of a half million copies. Each of the band’s most recent albums, Killswitch Engage (2009) and Disarm the Descent (2013), debuted in the Top 10 of the Billboard 200 Albums chart.

INCARNATE arrives as one of Rolling Stone’s Most Anticipated Metal Albums of 2016. “Strength of Mind” premiered via postmodern content network and powerhouse brand Nerdist, even as the band graced the cover of Revolver in Star Wars regalia, just before The Force Awakens smashed box office records. This is nothing new for KILLSWITCH ENGAGE. They’ve always been present in the heart of the culture with invitations to contribute to HBO’s Game of Thrones, WWE, God of War, Guitar Hero, Resident Evil, and even Freddy vs. Jason.

Two Grammy nominations, three Metal Hammer Golden Gods Awards, and two Boston Music Awards are just a small part of the fruit of their labor. The real evidence of the band’s impact lies in their fiercely devoted fans around the world.

The reckless abandon of creative passion, the search for higher truths and personal justice, and the authentic reality of the duality within all people – the light, the dark, the playful, the deadly – these are the components that comprise KILLSWITCH. They are the elements of KILLSWITCH ENGAGE, INCARNATE.