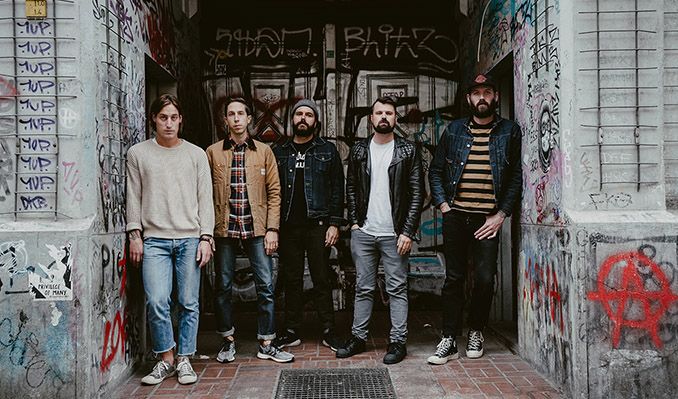 Longevity is a rare feat for any band, especially one rooted in a foundation of punk and hardcore.  Aggressive music is often fueled by youthful fire and sustaining a career without completely abandoning that urgent sound is almost impossible for most bands. But what’s possible for "most bands” has never been a concern for post-hardcore pioneers Silverstein. Throughout the course of their 20-year career, from Ontario basement shows to touring the world and selling over a million records, Silverstein has always managed to be completely comfortable in their own skin while never being afraid to challenge themselves. This perfect balance marks the band’s eighth full-length, Dead Reflection, an album that proves Silverstein still has plenty of fire left.

Dead Reflection is an album that couldn't exist without everything that's come before it, a culmination not just of Silverstein's sonic growth, but also the personal journeys entangled in the band’s career. Longevity was never the objective, but that drive to deliver their absolute best, no matter what the cost, is exactly why the band remains at the top of their game after almost two decades. For Silverstein there is no settling, no stopping, and they give nothing less than everything.

Taking influence from the likes of Lifetime, Gorilla Biscuits, and New Found Glory, Four Year Strong built an aggressive and melody-riddled combination of hardcore, emo pop, and pop-punk upon their formation in Worcester, Massachusetts. The band's lineup -- vocalist/guitarists Dan O'Connor and Alan Day, bassist Joe Weiss, drummer Jake Massucco, and synth player Josh Lyford -- was cemented during the musicians' high-school tenure in 2003, though a form of the band had already existed for several years. Following the appearance of two self-released EPs, Four Year Strong signed a deal with New Jersey-based imprint I Surrender Records. Their debut full-length, Rise or Die Trying, was issued on the label in September 2007. Tour dates with groups like the Starting Line, Valencia, and From First to Last kept them on the road for the remainder of the year. Their next release, an album of '90s covers called Explains It All, arrived at the end of 2009 and was followed a year later by the original set Enemy of the World.

At this point, the band decided to lose its synth element, paring down to a quartet and parting ways with Josh Lyford in the process. In 2011, Four Year Strong went into the studio with producer David Bendeth to work on their fourth album, In Some Way, Shape, or Form, which was released at the end of the year.. Released in 2014, their Go Down in History EP was considered a sort of return to form. In early 2015, nearly four years after their last LP, they announced the release of their self-titled fifth album and first for California-based indie Pure Noise. The album was a success for Four Year Strong, reaching number 77 on Billboard's Top 200. They followed it up two years later with a collection of rarities and unplugged material called Some of You Will Like This, Some of You Won't.

Official WebsiteYouTubeAmazonFacebookTwitter
*Service and handling fees are added to the price of each ticket.