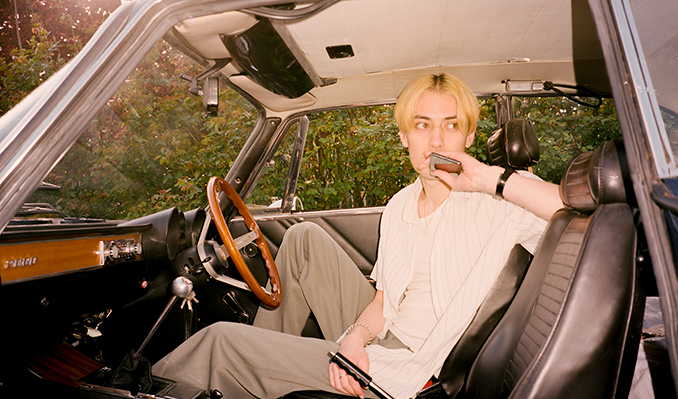 Dublin-born producer EDEN’s stunning new album In Case You Missed It consolidates the beating pulse of electronic music with the raw energy of a life resetting itself, revealing more about the label-head, multi-instrumentalist and songwriter than he has ever previously shared.

The eleven genre-defying tracks on ICYMI are made up of R&B hooks, ambient field recordings, crate-digging samples, and euphoric beats to tell the story of EDEN’s journey from a place of mourning and isolation to one of community and joy. As a producer his techniques are more experimental than ever, but the songwriting is a timeless blend of melody and soul. Work on the follow-up to 2020 album no future was hard, with EDEN scrapping the project three times as he battled to make something that matched his message that the hardest moments in life eventually become something to look back on fondly. A framed print of the Wolgang Tillmans photograph Resolute Rave hangs in his London home studio and offers something of a visual representation of the idea. It captures a busy club dancefloor as the morning sun streams in through an overhead window, two worlds colliding as the subterranean hedonism is bathed in natural light. “It makes me feel like the world is full of possibilities,” EDEN explains. “Openness, chance, and potential. These ideas really resonated with me.”

The breakthrough moment during the making of ICYMI came when EDEN returned to Dublin as the world went into lockdown in early 2020. The global pandemic spurred the move but a series of personal trials, including the loss of a friend and the end of a relationship, had left him feeling numb and unable to process what had happened.

“So many things in my life wrapped up and there was no going back,” he says. “Suddenly I was back in my childhood bedroom and it was all very bizarre.” It was in this moment, however, that EDEN wrote ICYMI’s “Call Me Back,” an epic centerpiece to the album that acts like a line in the sand; painful memories washing away to be replaced by a newfound sense of direction. “I was playing the chords over and over again and the melody for that song came and I started bawling my eyes out. That’s never happened before, I’ve never been in tears over music in that way. It felt like a new horizon.”

Eden says his music feels “more like excavation rather than construction,” and the idea of him revealing more of himself with each day spent chipping away feels relevant to ICYMI. “Modern Warfare,” another key part of the album, addresses his relationship with social media and the way in which it exacerbates problems in society. “It’s a stream of consciousness where I’m floating along trying to avoid the worst of it,” he explains. Meanwhile, Duvidha chops up samples of field recordings using a granular synthesizer and a Russian drum machine so obscure in its design that it uses crocodile clips. “Literally like a mad science experiment,” EDEN explains. The song takes inspiration

from the 1973 Indian film of the same name about a young woman’s relationship with a ghost. The name, translated from Hindi, means “The Dilemma.” The sonic palette of ICYMI is thrillingly unpredictable and surprising, with field recordings of conversation, a race track recorded in Japan, and clips of cult director Harmony Korine in conversation popping up at one point. “I wanted it to feel like wherever you are in the sonic space could be turned off at any moment,” EDEN explains, comparing parts of the album to ASMR.

For EDEN, ICYMI is about accepting the past and moving boldly into the future. It’s his most hard-fought and ultimately rewarding album to date; one that acknowledges the ways in which all of life is a collection of memories and feelings that inspire the next. It also feels like the most bold step forward from an artist who has, by his own admission, preferred to stay under the radar. Despite having released two studio albums and played live across the globe, until now he has always preferred to be seen as a lone ranger. With time, on top of long periods of isolation, this has changed and EDEN now embraces his community, which includes collaborators and friends such as rapper ATO, experimental artist Kai Whiston, and pop phenom Lauv alongside fellow underground artists like VTSS, Blackhaine, Koreless, Flohio, and Kojaqu. There’s also the next generation of internet-based artists who have cited EDEN as a major influence; hyperpop artists Ericoda and Underscores as well as ambient producer Claire Rousay. “Music is made to be shared and the intent behind my music is for it to be a communal experience,” he says as he finalizes an album that took him from tears in his childhood bedroom to blasting demos from car stereos with his best friends. ICYMI is the sound of an artist transforming, no longer a hidden gem but someone ready to step into a whole new future.

FacebookTwitterMore Info
*Service and handling fees are added to the price of each ticket.