with Animals As Leaders, Eidola, Veil of Maya, Wolf & Bear 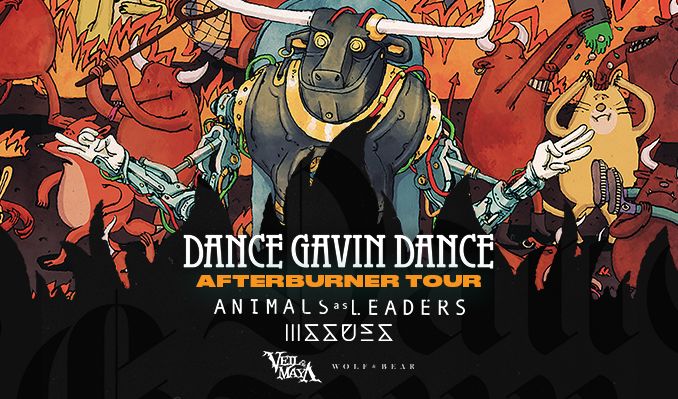 Dance Gavin Dance fully indulges the extremes of creativity. They mine the outer reaches of the rock music landscape with thrilling abandon. Their ambitious blend of heady progressive rock and post-hardcore became something uniquely their own.

Dance Gavin Dance fans have streamed “We Own the Night” nearly 12 million times on Spotify alone, with staple catalog anthems “Chucky vs. the Giant Tortoise,” “Young Robot,” “Inspire the Liars,” and “Deception” accounting for another 30 million streams on top of that. Their albums regularly chart in the Billboard 200, each of the last three progressively higher than the last, from Top 40 to the Top 15.

An international touring act for over a decade, Dance Gavin Dance has done Vans Warped Tour three times, toured with the likes of Underoath, A Day To Remember and Pierce The Veil, performed at major festivals, and headlined sold out club tours.

Where most bands erroneously claim wholly distinct identities, Dance Gavin Dance truly defies categorization. The Sacramento based outfit possess the kind of artistic compass shared with broadminded but heavy metal and hardcore-punk rooted iconoclasts like The Mars Volta and Coheed & Cambria, but use it to diverge wildly, charting a new course that incorporates the melodic screamo of Thursday or Taking Back Sunday, with a taste of the earnest pop melancholy of Death Cab For Cutie.

The current and most definitive incarnation of Dance Gavin Dance is responsible for half of the band’s albums, including their most recent effort, Artificial Selection. The new record is the strongest and most wondrously diverse showcase yet for the lauded post-hardcore experimentalists, equal parts intense, melodic, and unbound.

It’s all even bigger than ever on Artificial Selection, brought to life by close collaborator and producer Kris Crummett (Sleeping With Sirens, Crown The Empire, Issues). Dance Gavin Dance’s ambitious adventurousness and experimental spirit continues to differentiate them from the pack, from the funkier slow jam of “Count Bassy” to the heavy screamo of “The Rattler.” There’s a throwback to the Death Star era of the band’s sophomore album, “Shelf Life,” complete with former singer Kurt Travis. “Midnight Crusade” and “Bloodsucker” are guaranteed crowd pleasers. “Son of Robot” goes on an epic musical journey, from mournful to vengeful full stop.

As the Boston Globe astutely observed, “Dance Gavin Dance resists pigeonholing… heavy, ambitious, and sometimes witty rock that seizes on the past few decades of edge-dwelling music, places it all in a blender, and puts the speed on high.” (There’s even Motown, funk, pop, dance, and heaping helpings of indie rock in that blender.)

Now more than a dozen years on from their inception, Dance Gavin Dance celebrates an insurgent career, in the tradition of iconoclastic artists from Frank Zappa to Nirvana who did what they wanted, how they wanted, confident that an audience would catch-up. Eight studio albums deep, a thriving fanbase champions the band’s irreverent diversity and propulsive power.

More InfoOfficial WebsiteTwitterFacebook
*Service and handling fees are added to the price of each ticket.